Every moment presents an opportunity and a choice. 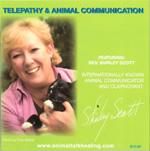 Start learning the skill of animal communication and telepathy. This is how all the animals even humans communicated daily. Learn how to tap into this form of communication and start opening your life up to the world of thoughts and animals. 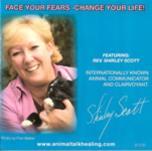 Face Your Fears - Change Your Life

The most challenging fear we face is that of change. On the CD, Shirley gives you tools to help you face that fear. Find out how to face the fear of change and start living a better life.

From Beyond the Grave

It was love at first sight for Peter and Kathy. They were perfect for each other and even Kathy's service dog, Ruby, loved Peter from the first night she met him. Kathy was painfully aware she was from a common background and Peter was from a rich family with power.

There was only one thing standing in their way; a woman from Peter's past. A woman that wasn't about to let 'her man' go. It is a love/horror story with a twist at the end.

As you read through this book, remember to keep an open mind, positive thoughts, and feel in your body how you are feeling about any of these tools. This is a fun book to help you explore different ways you might want to look at your life, your future, and if anyone from the other side is trying to talk to you.

Some of these tools and practices are very old and are either not used today or used in a very limited way. I am not endorsing any of them. What I am doing is bringing out information about how these are used and what the users think they do for them.

2020 was a rough year worldwide however, it was about to get worse. Tensions were high when a worldwide pandemic caused financial ruin, leaders restricted freedoms and made laws to control the masses. Jobs were scarce and people were going hungry and losing their homes. Chaos reigned in every country.

There had been two massive secret projects that most of the people around the world knew nothing about, only the rich and powerful leaders knew about these projects. This elite group of people had seen the downfall coming and were preparing to save themselves and their families.

Underground building had been going on for decades around the world and the space station had evolved into a massive place where thousands of people could live.

​Why She Has to Die

Then, on that fateful night in May, everyone in the county who had a police scanner was glued to it. The people that lived near Stephanie were calling into the Sheriff’s office in a panic. They wanted to make sure they were safe as they heard there was an armed and dangerous man hiding in the woods ready to have a shootout with the cops. There was something about a woman in a cabin and she couldn’t leave because of this mad man.

As you read through this book, my intent is to help you change your way of thinking about life and your life. I have left room between each day so you can write notes about what happens in your day when you start it with a positive thought and hold that thought throughout the day.

Writing down events or situations will help you see how positive thinking can change you in a positive way. There are no chapters. The only character in the book is you. The only plot is a positive thought. 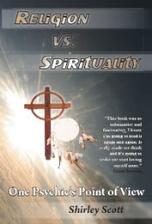 NEW - I have a new book out! Religion vs. Spirituality will help you understand there are some things that just can’t be proven but they are real and they happen every day.

It explores our basic belief systems in a simple, down-to-Earth way that everyone can understand. I believe whether you’re religious or spiritual, your belief system should never be too complicated.

﻿What is the difference between ghosts and demons? How to know if you are dealing with a ghost, a demon, or residual energy. Shirley believes that there is intelligence in all energy and we can all learn and grow from it, even ghosts and demons. So open the book and open your mind to what might not make sense but does exist.